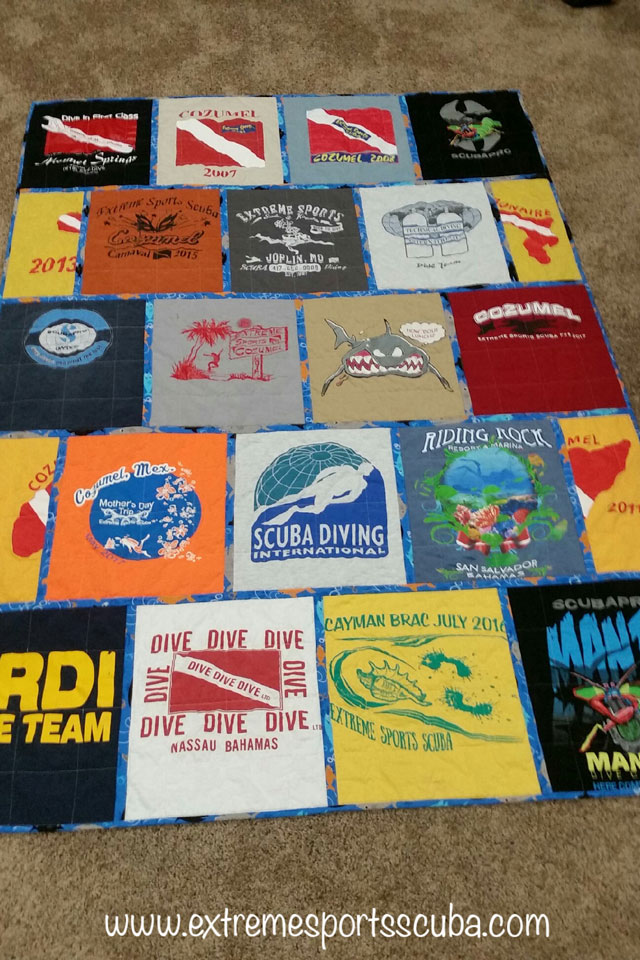 Earlier this year we decided to do something fun. If you happened to be at the meeting last week, Deb mentioned what we’re doing. But for the rest of us, I want to explain.

First off, the title of the post gives you an idea, we’re making a T-shirt Quilt.

Back in 2018, our friend Harriett Miller made Grady a t-shirt quilt out of old dive t-shirts (see above). Jump forward to January of this year and Deb and I got to talking. I mentioned that we should make a t-shirt quilt this year. We’ll have a shirt at every dive club plus each event. We would like all of our divers and friends to sign the shirts. Then Harriett is going to help me (the blogger for those of you who don’t know) make a t-shirt quilt. END_OF_DOCUMENT_TOKEN_TO_BE_REPLACED

Where did February go? I think it ran off. Allison made the comment just this morning that it seems like it has been ages since we’ve all seen each other. Unless you went on the February Cozumel Trip, that’s probably true. The February meeting was canceled due to bad weather. January’s meeting happens on the New Year’s Day Dive. So, here we are, it’s March.

You’ll get the full list of upcoming dates tomorrow, but here are a few to plan into your calendar.

Tomorrow you’ll get the big list, but make sure you make plans for these 3 upcoming events! END_OF_DOCUMENT_TOKEN_TO_BE_REPLACED

Right now is the hype about Super Bowl 54. Yey, the Chiefs made the Super Bowl for the first time in 50 years. If you’ve been living under a rock, they are playing the San Francisco 49ers.

It seems like on the ol’ blog here, we usually have at least 1 KC Chiefs post per year. This year happens to be facts about the KC Chiefs. I thought it would be fun to put some facts out there about the Kansas City Chiefs.

END_OF_DOCUMENT_TOKEN_TO_BE_REPLACED

How many times have you written 2019 since it turned 2020? I have more than I should have so we won’t discuss that. There for a while, we were recapping all the posts of each month and year to date and then somewhere along the way, it stopped. But it is a clean slate when we started 2020. We’ll see if we can do better in 2020.

p.s. did you figure out the song that this is referencing? If not, click here!

p.p.s Yes, this is a real picture that Dan La Due took of a Shark that I modified (or was it Doug Lord?).

Just a note: if you type in Scuba Turkey Thanksgiving, the picture above is number 3 in the line-up :). haha.

You have 33 days to let go of everything that needs to stay in 2019 — People, Pain Defeats, Disappointments, Hurts, Heartbreaks, Grudges, Failures,  Mistakes, and Missed Opportunities. Let it ALL go. 2020 is going to be a year of fresh starts, new beginnings, new chapters, new chances, and Brand New Opportunities.

And on that note, you’re probably singing Let it go from the original Frozen Movie. You’re welcome.

Happy Thanksgiving from our house to yours!

Today’s blog post brought to you by Brian Head.

Left to right J Dennis Hoffman, Larry Chalmers, myself (thinner and a lot younger) and Grady during his wooly beard phase (never knew how he could stand to dive with that). Cozumel April 2009

I have been watching as folks have mourned Grady Weston. I knew I wanted to say something but it took me a minute to process and figure out what to say. For those of you that don’t know him you probably won’t understand this post but for those of you that know Grady, you will know… Grady is a tough nut to crack. At one moment tough and unyielding and the next taking the shirt from his back to help someone he barely knew. I first got to know Grady and Deb in 2006 on a dive trip to Belize. This was my first trip and yes there are stories. That trip cemented a friendship that endured. It’s been repeated over and over but it’s not only true but remarkable, “once you were a friend you were family”. I came away from that trip knowing exactly who I wanted to dive with and spend my vacations with. END_OF_DOCUMENT_TOKEN_TO_BE_REPLACED

Thursday, October 24, 2019, we lost one of our own. A husband, father, grandfather, great-grandfather, brother, dive instructor, mentor, friend, and Pete’s food giver. Grady Weston gained his wings, suddenly and unexpectedly. Born October 7, 1955, in Joplin Missouri, Grady went on to accomplish many great things. After graduating from Seneca High School in 1973, he attended Crowder College, before joining the U.S. Army in 1975 stationed at Ft. Leavenworth, KS.

On March 7, 1975, he married Deborah Drake. They had their sons Justin in 1977 and Jared in 1982. Grandchildren Shaye, Drake and Tucker. Great-grandson Kyng.

Grady became an owner of Ed’s Electric in 1983, where he was a Master Electrician. After getting SCUBA certified in 1989, his continuing SCUBA education led the Westons to open Extreme Sports SCUBA in 1997. In 2001 he became an instructor. He has logged well over 3,000 dives and made the trip to Cozumel, Mexico over 50 times plus many dives to multiple other tropical locations. END_OF_DOCUMENT_TOKEN_TO_BE_REPLACED

We have tossed around multiple ideas on what to blog about today. Today, do you know what today’s date is? September 11. 9/11. Do you remember where you were this day 18 years ago? Our older generations of divers were there. This is another one of those days that will have significant meaning in our lives, forever.

It will fall in line with

And these are to only name a few. These dates had significant impacts on our lives. And when 9/11/01 happened, the world has never been the same. END_OF_DOCUMENT_TOKEN_TO_BE_REPLACED

Happy Friday. Just think, we’re are approaching the “beginning of Summer.” Now, we can debate this because technically Summer solstice doesn’t start until June 21, 2019, but people think summer starts on Memorial Day Weekend. And hint, in case you didn’t know, Memorial Day Weekend is THIS WEEKEND!! There will be lots of diving going on at the lake. You might want to come to join us at Beaver Lake for fun and games.

So, back to the blog post title, #blogApril. Let’s take a look back at the blog in April 2019. I think today though we’re going to break this down a couple of ways. We’ll cover our normal Top 5 blog posts for the month. Then we’ll look at the top blog posts from April 2019. I mean, come on, we blogged every workday (Monday through Friday) last month. It was a lot of fun and I had a lot of great helpers! Finally the year to date. Maybe now I should say, and finally, we’ll list all the blog posts in case you missed one.

Last month we covered a lot of great topics, so if you missed something, make sure you check them out. Like I said, a lot of good topics from different perspectives. Thank you, Deb, Grady, Dan, Doug, Chuck, Shaye, Addison and of course yours truly with help on writing these posts.

END_OF_DOCUMENT_TOKEN_TO_BE_REPLACED

Receive us directly to your inbox

Red flag flying today. They closed the port to sm

I wear my dive mask at night, don’t you? http:/

Lined up waiting for the Manati to arrive & take u

A boat full of divers headed back to the dock #sc